Welcome to Santiago de Compostela, the Sacred City, built stone by stone around the said resting place of the Apostle Saint James. 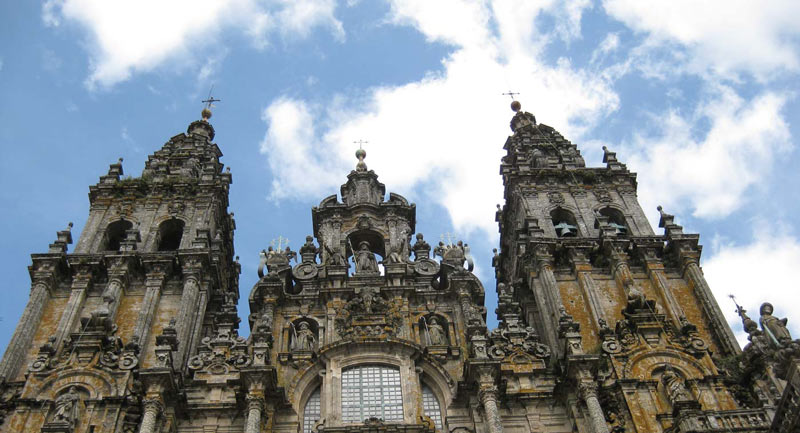 The Galician novelist Valle Inclán wrote that: “… of all the old Spanish cities, the one which seems to be trapped in a dream of granite, immutable and eternal is Santiago de Compostela…. although it doesn’t appear ancient, but rather everlasting. But Compostela, in the ecstasy of the pilgrims, unites all its stones in one single evocation. There, the passing hours are just one hour, repeating itself eternally, under a grey rainy sky…”

And it is said that in Santiago it is always raining, but ask any Compostelano and they will tell you that here rain is Art and that Santiago is only it true self under the rain. For here, inexplicably, it is somehow different to the rain in other places and as the yellow stones of the Old Town start glistening like nowhere else on earth. Here similarly to Ireland, when Galician moved abroad due to economic difficulties and even hunger over the centuries they kept singing about the green countryside and the magical rain in Santiago de Compostela.

But this should not scare you from walking the Camino and visiting Santiago because the rainy season is usually during winter and from May to October Santiago undergoes a transformation. When the sun comes out, the many wonderful terraces bars and restaurants open and become the centre of life in the Old Centre.

With relatively cheap drinks and free tapas, everyone can afford to go for a “caña” or a “vino” (tap beer and wine) with tapas. And they do. When the sun comes out, and it does and much more often as you would be led to believe, you will witness an extremely bustling city, full of life, incredible monuments and unforgettable sunsets.

In between the pilgrims, with their raw emotions of having accomplishing the Camino that they will share to any listening soul, the many students and the colourful locals with their Celtic traditions, their love of music, storytelling and food, and Santiago itself with its History, its delicious gastronomy and of course its Cathedral, no-one can be immune to the atmosphere of Santiago.

Although Santiago, for itself alone, is well worth visiting, don’t forget that it also makes an excellent base or starting point from which to discover the rest of Galicia. Very close to here you will find the famous “Rias”, (coastal inlet formed by the partial submergence of an unglaciated river valley) which are both spectacular and magical. And from Santiago, it is also easy to reach the “Finis Terrae”, “the end of the world” – so declared by the Romans, which looks directly out over to the Atlantic Ocean.

For those interested in learning more about Santiago de Compostela, the Cathedral and organising Day Tours around Galicia. We organize Guided Tours of the Old Town and the Cathedral as well as regular departures to Finisterre, the Cies Islands, the Rías Baixas, Spa Escapes and much more.