The Pilgrim community woke up in shock this morning as the Dean of the Cathedral of Santiago de Compostela announced there will be no Mass at all in the Cathedral in 2019 because of the ongoing restoration works. In this article, we would like to clarify what this means, why this should not impact your travel plans and detail where you will be able to attend Mass during this time.

For the first time since it was built, there will be no service in the Cathedral of Santiago de Compostela at all for 12 to 18 months, starting from next week, Monday, January 28th 2019.

The Cathedral & the Pilgrim Office did warn pilgrims and neighbours of Santiago for over a year that there might not be any use of the Botafumeiro during Pilgrim Mass for 6 months in 2019, but the latest news is much worst than expected:

After months of investigation and negotiation, the Dean of the Cathedral has announced today that due to the unexpected scope and magnitude of the essential works required in the interior it will be impossible to maintain the normal activity in the main altar, naves and in the chapels of the basilica.

But the Cathedral will remain open for visits in the areas not under construction, you will be able to see the newly repainted Portico de la Gloria and Pilgrim Mass will be moved to different churches around the City.

END_OF_DOCUMENT_TOKEN_TO_BE_REPLACED

Last year in 2017, a total of 301 036 pilgrims received their Compostela, the Certificate of Achievement of the Camino de Santiago, which is 30 000 more than during the last Holy Year in 2010.

This is the most pilgrims on the Way of Saint James in centuries and is a direct reflect on the increasing popularity of the Camino de Santiago. 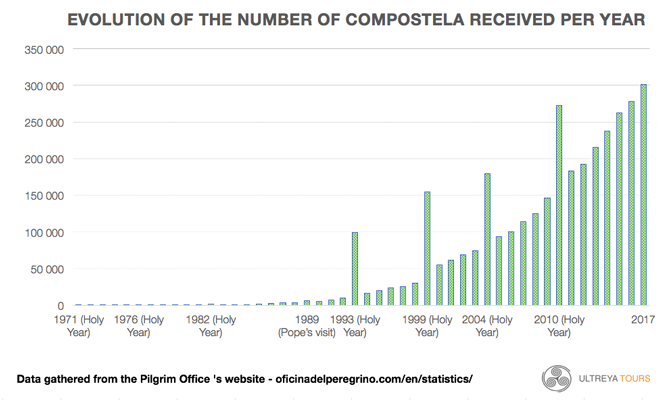 More people on the Camino and enjoying its benefits is a wonderful things, and in this article we would like to invite you to learn a bit more about those brave 300 000 pilgrims who accomplished their goal last year.

Summary of the updated official Camino de Santiago statistics given by the Pilgrim Office for 2017:

The Camino de Santiago, also known as the Way of Saint James, is the name used to refer to all the routes that lead to where the apostle Saint James the Great is said to be buried. The Camino has been one of the most important Christian Pilgrimage for well over 1,000 years and it has started a new international rebirth.

The Camino is a journey to the religious and historical roots of Europe, it’s traveling through beautiful countryside and timeless villages, it’s rediscovering the pleasure of being in direct contact with nature.

But it is also an invitation, to rediscover yourself through introspection and new encounters, to change habits that have been making you unhappy, to build unexpected friendships and give yourself new challenges.

Find out here about our Caminos and how we can help create the Camino you are looking for.