Working as a guide on the Camino, I was happily surprised that my first clients were a group of Yogis from California. As a yogi myself, I found it fascinating that yoga teachers from all over the world were coming to practice yoga on the Camino!

Later on, a profesional project put me to walk the Camino in the search of how much Yoga, as in asana or meditation sessions, was available on the ancient path to Santiago. The results of the search were beyond any expectations. Yoga is so present in the Camino that my original plan for a one month trip became a three months journey!

Not only I found Yoga; I realized the Camino is Yoga.

Looking at their origins, both spiritual paths arose from similar universal needs in the Eastern and Western worlds and they have shared parallel evolutions through History until today. Now, they share a moment of expansion, after decades of fast growing interest from explorers around the world.

The future? It is already happening now. Both paths are converging and sharing the simplicity of their principles. It all starts by making the body move which has a certain effect in our minds and slowly it leads us to a new ways of seeing ourselves and life. 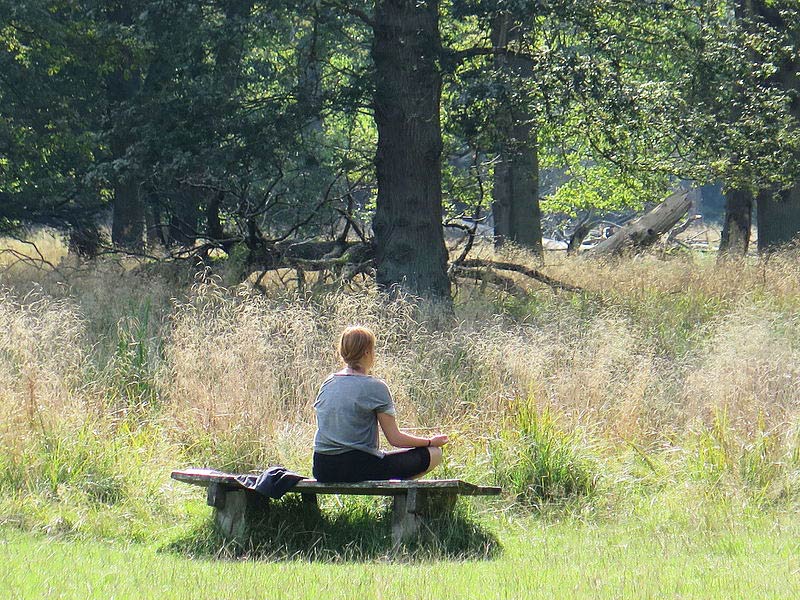 According to the dictionary, a pilgrim is “a traveler or wanderer, specially in a foreign place”. A pilgrimage involves a physical effort to get somewhere.

This means renouncing your own confort.

It involves becoming a stranger and being always on the move.

It involves jumping into the uncertainty of a path that we walk on our own.

No matter if we travel with others or not, we all experience the same pains in our legs, blisters on our feet and we all have to struggle with our will to continue when we are tired and sore…

The core of the pilgrimage is continuing to walk despite the lake of comfort, the effort, your tiredness, and yet, the one thing that still strikes me the most, when I see pilgrims, is that they laugh so much!

Of course, there is the movement of the body, the breathing expansion which creates endorphins, which, as in any other physical activity, brings a sense of wellbeing and happiness.

There is also the contact with nature and with people from all over the world. This makes it fun and enjoyable, and allows us to learn new things, and expand our world.

But there is something else in the Camino. Something that makes it different to any other trekking trail.

I can’t tell exactly what it is. To me, it is another of the many mysteries and legends that surround the Camino. If I had to guess what is that drives people from every religions, races and cultures to come to Spain and walk, I would say the Camino speaks an Universal language.

A language of walking with a higher purpose and sharing with other similar explorers.

Everything starts with the movement of the body, which always has a softening effect on the mind, giving it more silence and space. If we mix that with the conversations and silences of other pilgrims from any part of the world, slowly we start loosing many of our old schemes, prejudices, fears, fabricated limitations etc., and we slowly discover new perceptions of ourselves, the world and life. Just like Yoga.

Looking back at the origin of both practices, we find the same need, inherent to the human beings of any time: the need to explore other realities, outside and within.

In India, around 5000 years ago, the search for other dimensions of themselves, led to Yoga as we know it today, with the gathering of ancient spiritual practices of the local cultures.

Surviving many challenges, as the predominance of oral transmission, persecution, discrepancies of Masters , etc., the beginning of the XX century witnessed how Yoga left India and travelled, thanks to pilgrim gurus like Yogananda, Iyengar or Patabhi Jois among others, reaching the western world in the 1920s.

In the same way, there are evidences that the Camino was already an initiation journey for the Celtics and the Romans, in their search for what was thought to be the End of the World in Finisterre, Galicia.

Later on, in the IX Century, Santiago de Compostela became the destination for pilgrims from all over Europe, a Catholic rebirth of an ancient path. From then on, the Catholic faith led thousands of pilgrims to enter a Journey that would lead to spiritual growth, as they claimed with the famous latin salutation: ¡Ultreya and Suseya! Further ahead and higher up!

Six centuries of this popular religious pilgrimage contributed to the configuration of Europe in many cultural, artistic and spiritual aspects. In the XV century, the pandemic threats and cultural changes brought by the Humanism, opened a long period of decline and silence for the old pilgrimage route. The Camino reinvented itself to become a path free of labels, open to anyone eager to explore, and blossoming again in the last decades of the XX century.

The reality of today is the outstanding growth of practitioners around the world of both paths.

Just as an example, as per the newly released 2016 Yoga in America Study Conducted by Yoga Journal and Yoga Alliance shows that the number of US yoga practitioners has increased to more than 36 million, up from 20.4 million in 2012.

So, the Camino and Yoga have not only survived the challenges of History, but are more present than ever today. Actually, it is not only that: in the XXI century, both paths started to converge!

You can find pretty much any spiritual path in the Camino.

In the past year, while walking as a guide and as a pilgrim, I have shared the path with Yoga teachers and practitioners from America, Europe and Asia, a Chaman that has walked to Santiago several times, Muslim women from Dubai walking for empowerment, Hindus coming all the way from India, Buddhists, Tibetan bowl players, Cabala students, Rastafarians, Catholic priests that talked about chakras, renouncers that have been walking the Camino for years without money… all sorts of wonderers!

I believe, this is the beginning of the future of the Camino de Santiago: a path that embraces all spiritual journeys and offers a physical space for them to expand. 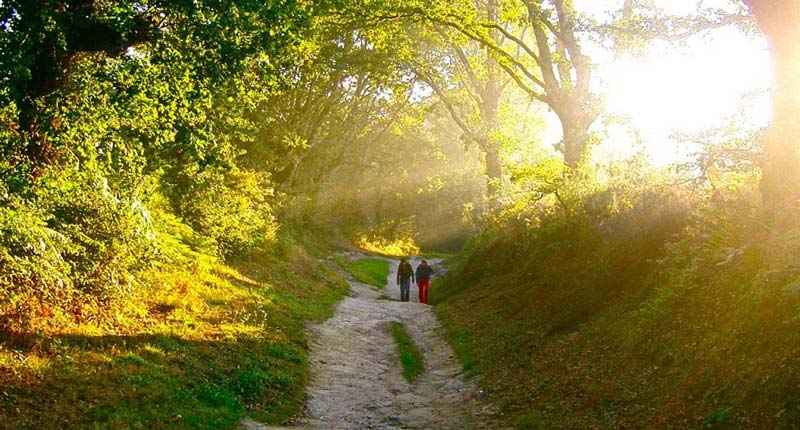 How can this pilgrimage help a yogi?

The first evident benefit would be the physical strength and breathing benefits obtained with the 4 to 8 hours walk every day. Changes on the mat are guaranteed, different for everyone, but always a step forward.

More important is the strength gained at a mental level. The Camino allows us to explore our limits and accept them humbly when they are real. We also learn to ignore what is just noise in our minds and not a real physical need.

We give up the confort of our lives and mainly everything that defines our identities to just become a pilgrim. We are all equal when facing the demands of the trail.

The Camino will probably make us go through every emotions, from frustration and even anger to peace, calm and extreme joy to find a fountain or some shade!

We visit the entire spectrum, but we do not stay long in any of them, because the Camino never stops. Every day we change of places, hosts, companions, weather, landscape, challenges of the stage.

As pilgrims, we live in the present, and we see how our minds do not attach or make anything seem so important anymore, because nothing really lasts for too long, the mind has no time to develop any long story about anything. Just by walking and changing scenery everyday, we are training our mind to enjoy the good moments without attaching too much importance to them and we go through the uncomfortable moments without a fight.

All of the above happens in the Camino and all of it is Yoga! Sometimes it is hard to practice in our lives all these things that we learn from our Yoga teachers, even if we practice Yoga regularly on the mat.

The Camino has the perfect conditions to practice them. That is why the Camino is becoming such a popular destination for Yoga practitioners, which are making it a yearly time away to find their way.

If you want to walk the Camino de Santiago with me with daily yoga lessons, check out our Yoga on the Camino tour on the Sanabrés Way and contact Ultreya Tours for details!