On the 13th of December 2015, the Archbishop Barrio of Santiago de Compostela opened the Holy Door of his Cathedral under the recommendation of the Pope Francis in honor of the 2016 Jubilee Year of Mercy. This is an extraordinary event as the Holy Door should only be opened on Jubilee Years, when the Feast of Saint James, the 25th of July, falls on a Sunday. 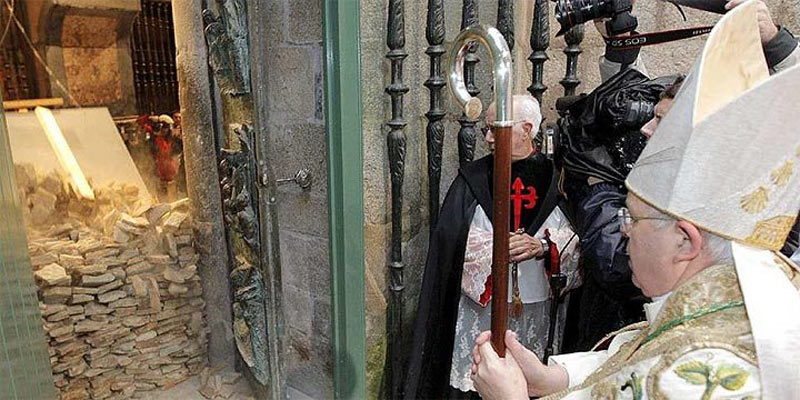 According to Catholic traditions, walking the Camino on a Holy Year or during the 2016 Year of Mercy and entering the Cathedral of Santiago through the Holy Door gives believers plenary indulgence.

In this post, we would like to explain what this means and what happens on traditional Holy Years.

The Extraordinary Jubilee Year of Mercy

On the 13th of March, 2015, Pope Francis had declared 2016 to be the Extraordinary Jubilee Year of Mercy with the following words:

I have decided to announce an Extraordinary Jubilee which has at its centre the mercy of God. It will be a Holy Year of Mercy. We want to live in the light of the word of the Lord: “Be merciful, even as your Father is merciful” (cf. Lk 6:36). And this especially applies to confessors! So much mercy!

This Holy Year will commence on the next Solemnity of the Immaculate Conception and will conclude on Sunday, 20 November 2016, the Solemnity of Our Lord Jesus Christ, King of the Universe and living face of the Father’s mercy.

The opening of the Holy Door

Anyone that visits Santiago de Compostela will notice the façade of the cathedral that faces the Quintana square is something special. Highly decorated but fairly small it stands out on a large austere square.

This is the Holy entrance to the Cathedral (the “Puerta Santa”) which dates from the beginning of the 17th century.  The door is only opened on Holy Years and will be exceptionally opened by order of the Pope Francis in 2016 in honour of the Jubilee Year of Mercy.

Holy Years, Jacobean Year or Años Xacobeos happen only in years when the 25th of July (Saint James Day) falls on a Sunday and are known as “Años Santos Compostelanos”.

The opening of the “Puerta Santa” is carried out following an ancient ritual on the 31st of December of the year prior to the Año Santo.

The master of ceremonies, armed with a small silver hammer, knocks three times on the bricks covering the door and after the first blow speaks the following words:

“Open the doors of this house in which resides the Just”

After the second hammer blow, he says:

“I will enter into you house Lord”

After the third blow: “Open the doors, let the Lord be with us”.

The wall is then knocked down and all those present try to obtain a piece of it to keep as a good luck charm.

The first Holy Year in Compostela

The first Holy Year (Jubilee Year) of Compostela was celebrated in 1182. This makes it much older than the Roman Jubilee, which was established in the year 1300 by Pope Boniface VIII and initially repeated every hundred years.

In 1343, Clement VII changed this to every 50 years and later Paolo II to every 25. The Holy Year of Compostela is celebrated much more regularly.

The enormous threat posed by the Turkish dominance in Eastern Europe significantly increased the importance of the pilgrimage to Santiago, putting it on a par with those to Rome and Jerusalem.

Legend has it that Saint James appeared one night in a dream to the Emperor Charlemagne and according to the “Codice Calixtino” this is what he saw:

Pilgrims singing accompanied by the sound of zithers, lyre, drums, trumpets, viols and psaltry. No language or dialect was not represented there. The doors of the basilica remain open with by day and night and shadows flee from this august place that shines with the light from its lamps and its candles as if lit by the midday sun…

The Camino de Santiago was born!